Since its founding, Guelph has been a centre of excellence for agriculture.  Early settlers included knowledgeable stock breeders (Howitt, Hood, Stone, Arkell, McCrae to name a few) who imported the finest pedigreed livestock including Suffolk and Clydesdale horses, Hereford cattle, Yorkshire and Berwickshire hogs and Costwold and Southdown sheep.   Guelph's reputation led to our city being known as the “Smithfield of Canada”, a nod to the famous meat and cattle market in London, England.

Given Guelph's reputation and influence in agriculture circles, it comes as no surprise that our city was selected as the permanent site for the Ontario Provincial Winter Fair in 1889.   The decision to locate the Ontario Agricultural College in Guelph in 1874 also played a significant role in cementing the city's reputation as an agricultural leader. 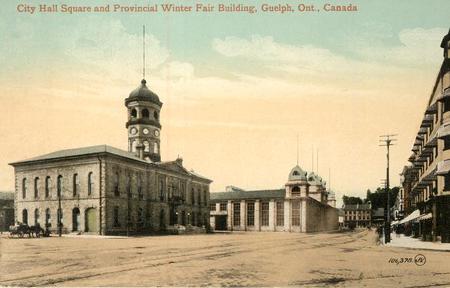 The fair was suspended during World War II.   Sadly, due to competition from other fairs in London and Toronto, it never resumed operations.   In 1948, the former Provincial Winter Fair site was partially demolished to make way for Memorial Gardens.

In the early 2000s, during preparations of the former site to build a new City Hall, the front facade of the 1900 era Provincial Winter Fair Building was found to be relatively intact and stable inside the Memorial Gardens arena.  The decision to incorporate the wall into the new design of City Hall and Market Square is a fitting reminder of the role that agriculture and the Fair played over two centuries of our community history.