The Burning of St. Patrick's Church

Looking at Catholic Hill today, with the majestic and iconic Basilica of Our Lady presiding over the downtown, it is hard to imagine the frontier violence that was percolating in Guelph in the 1840s.   The burning of St. Patrick's Church t was motivated by ethnic and political tension, at a time when British Protestant and Irish Catholic conflict was rampant both domestically and across the Atlantic.

When Galt designed the city, he specifically reserved three 'terminating vistas' in his radial design for the three dominant churches.  St. George's Square was allocated to the Anglicans, who erected the first St. George's Church in the middle of the square.  St. George is the patron saint of England.  Market Square was reserved for the Presbyterians who built the first St. Andrew's Church on the site, named for the patron saint of Scotland.  And the highest point in the landscape at the height of Macdonnel Street was for the Catholics.  Galt, a Scottish Presbyterian, selected this site specifically as a dedication to Bishop Alexander Macdonnel, who had provided him with advice during his tenure with the Canada Company.

By 1833, the local Catholic settlers had erected a small wooden church that they named St. Patrick's, after the patron saint of Ireland.  This image of St. Patrick's Church below is a sketch from Guelph: Its Early Days and Later by David Allan. 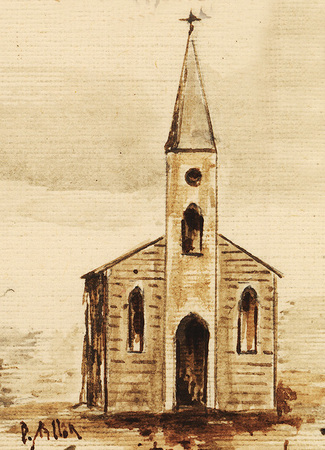 Guelph (and Upper Canada) was a microcosms of political unrest mirroring the violence between the Orange Order (English loyalists in Ireland) and the Catholics.   Locally, Dr. William Clarke, an Orangeman, was a polarizing figure who used his position as local magistrate to inflame local tensions.  Conflict betweens local groups was becoming more and more frequent.   In October 1846, news reached Guelph that Irish Catholic reform leader Daniel O'Connell had been freed from prison.  In celebration, local Catholics gathered in the public square and lit a bonfire.   Local Orangemen warned them that there would be another bonfire the following night, and indeed, the next evening St. Patrick's Catholic Church went up in flames and was destroyed.  A reward was offered to find those responsible, but the arson was never solved.

The local Catholic congregation rebuilt a new church on the site, this time in stone, and named it St. Bartholomew's .