49 Albert Street, built in circa 1856, is significant for its association with Matthew Bell, a local stone carver and mason. This one-and-a-half-storey dwelling is one of a number of richly ornamented stone houses built in Guelph, by Matthew Bell and his sons, during the period of 1850 to 1880. A native of Newcastle-on-Tyne, England, Bell distinguished himself not only by the well-proportioned elegance of his buildings, but also for the finely carved stone embellishments on many of their facades. These included the neighbouring stone dwellings at 96-98 Water Street and 40 Albert Street. 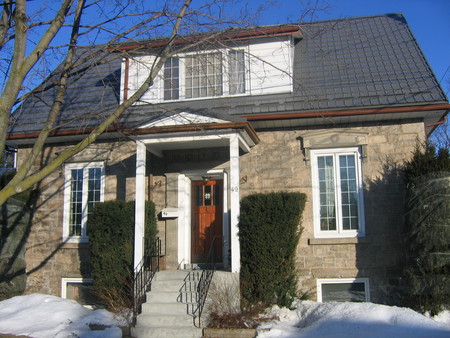 The house was occupied by Bell and his family until 1857, when it was sold to James Cain, a high constable with the local militia, who lived in the dwelling for over ten years. Other owners included James Hodgson, a skilled knitter and weaver, whose wife Agnes operated a small variety store out of the house and provided refreshments to local workers in the “Brooklyn” neighbourhood, on Saturday nights. The Hodgson family occupied the dwelling from 1874 to 1902. The house was also used for a number of years as the Brooklyn Mission Sunday School, until 1905, when a larger mission was constructed on Albert Street.

49 Albert Street has finely carved stone embellishments. Of particular note are the carved bracketed lintels over the two front windows, embellished with wreaths and rosettes within a recessed panel, supported by double scroll brackets terminating in acanthus leaves. Carved embellishments surrounding the front door are also of significance, particularly the fluted pilasters and the decorated pediment, again displaying carved wreaths and a central lamb's head. The design is very similar to the decorative carvings found on the portico of “Moreton Lodge”, built by Bell for Guelph businessman and stockbreeder F. W. Stone, which now stands on the University of Guelph's front campus.