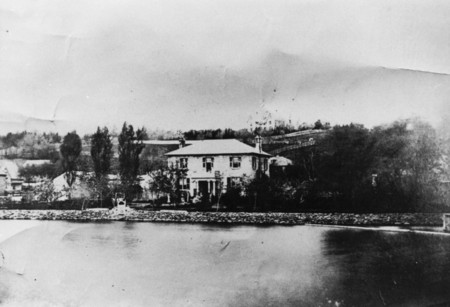 “Sunnyside”, located at 16 Arthur Street, is situated on the northwest side of Arthur Street, north of the intersection of Arthur and Rose Streets in the City of Guelph. This property consists of a two-storey limestone building that was constructed in 1854.  The property was designated by the City of Guelph in 1980 for its historic and architectural value under Part IV of the Ontario Heritage Act (By-law (1980)-10466).

“Sunnyside” is associated with the Kennedy and Davidson families of Guelph. William Kennedy, a Scottish stone carver and mason, designed and built the house in 1854 as a wedding gift for his daughter, Mrs. Charles Davidson. The house remained in the Davidson family for 123 years.

Sunnyside is one of Guelph's architectural treasures and was built with a commanding view of the Speed river and features a carved stone sun-dial in the garden. This large two-storey limestone building features a stone portico overlooking the Speed River. It is an unusual example of Ontario stone sculpture and has been featured in a number of books about Ontario Architecture. Characteristic of Scottish Georgian architecture Sunnyside also features a three-bay front along the river, with a window flanking each side of the central doorway. This building is generally box-like with asymmetrical additions to the rear. Sunnyside also features a low-pitched, side-gabled roof.