The Petrie Building, located at 15 Wyndham Street North, is situated on the east side of the street between Cork and MacDonell Streets in the City of Guelph. This four-storey stone and timber building is reminiscent of the Second Empire style. The property was designated for its heritage value by the City of Guelph under Part IV of the Ontario Heritage Act (By-law 1990-13553).

Located in downtown Guelph, the Petrie Building is a local landmark indicative of a prosperous era in the City's commercial growth. It is surrounded by numerous noteworthy designated heritage structures, including the adjacent Kelly Building.

The Petrie Building was designed by Guelph architect John Day, was completed in 1882 for Alexander Bain Petrie. Petrie was a local pharmacist and manufacturer, and one of the City's most successful and influential businessmen. Four-storeys high and constructed of stone and timber, it is one of a very few buildings remaining in Canada incorporating a stamped galvanized iron façade. This was a popular building technology of the late 1800s and was used as a substitute for wood, stone or cast iron. There are only three documented buildings in the country erected prior to 1890 with full sheet-metal facades, the other two being Victoria Hall in Hamilton and the Empire Hotel in Winnipeg. The galvanized iron facade was manufactured for Petrie by the Ohio firm of Bakewell and Mullins, specialists in architectural sheet metal working. Stylishly ornamented and elaborately embellished, the facade is distinguished by a bold cornice with a broken pediment framing a large mortar and pestle, a reminder of the building's original function as a pharmacy. 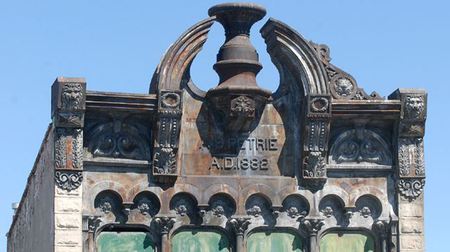 Enjoy a tour, courtesy of Angus McLellan, prior to the commencement of the 2016-2017 major restoration.

Petrio- Three lenses on the Petrie Building from Angus McLellan on Vimeo.