The Boarding House for the Arts (formerly the Guelph Civic Museum), located at 6 Dublin Street South, is situated at the northeast corner of Dublin Street and Waterloo Avenue. The property consists of a three-storey limestone building that was designed in the Neoclassical style and was constructed in 1847. The property was designated by the City of Guelph, in 1977, for its historic and architectural value, under Part IV of the Ontario Heritage Act (By-law (1977)-9424). 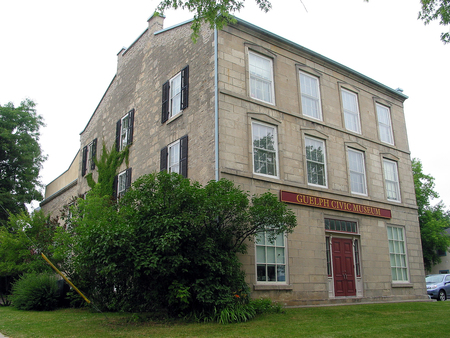 The structure at 6 Dublin Street South is associated with the early development of the City. The land on which the Guelph Civic Museum stands was purchased, in 1844, by Robert Day on, what was then a prime location, the historic Huron Road to Waterloo. This area grew to become Guelph's first business district, before the development of the railway. This building was constructed, in 1847, by two well known builders, William and Thomas Day, for use as an inn or tavern. It was then sold to George Warren, who used it as a grocery store and hotel, for ten years. It subsequently served as a school, a boarding house, run by the Black family, a doctor's office, a store, and a centre for the Great War Veteran's Association, which later became the Royal Canadian Legion.

By 1931 the building had become a meeting place for the Knights of Columbus, who undertook extensive renovations, including the removal of a section of the floor, to create an assembly hall. The City of Guelph purchased the building, in 1977, and it became the Civic Museum, which was originally housed in the Old Market Building. At this time it, also, underwent partial restoration. The move and restoration was very successful, and the building won a Guelph Arts Council Heritage Award, in 1980.

The Guelph Civic Museum is a good example of a 19th-century hotel. It is also the largest stone building erected in Guelph before 1850. The principal, or south, façade, which faces Waterloo Avenue, is constructed of large ashlar blocks, of a fine grained, cream-buff coloured crystalline limestone. The two upper storeys of the façade feature four bays, with simple stone verticals and a lintel of a flattened triangular shape. The central front entrance, flanked on either side by a window, is highlighted by sidelights and a flat transom. The Dublin Street elevation has three bays accented by louvered shutters. This elevation also features a gable, which peaks at large joined double chimneys.