Guelph's first Heritage Conservation District, Brooklyn and the College Hill are linked geographically, but each has a very different history. 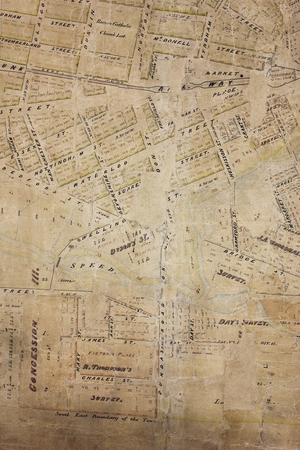 Brooklyn is bounded on the north by Forbes Avenue, to the south by the Speed River, to the west by Maple Street and by James Street East to the east.  The boundaries of the designated HCD differ slightly from the historical area.  Brooklyn has retained many features of its early industrial and agricultural heritage.

When the Town of Guelph was founded in 1827, the land south of the Speed River was opened for development as soon as a bridge was constructed in 1828 on what is now Gordon Street.  When the Gordon Street bridge was replaced in the 1870s, the area south of the river earned the nickname "Brooklyn", a nod to the construction of the Brooklyn Bridge in New York City linking Manhattan to mainland.

Once the site of several quarries, a mill, a tannery and farmland, Brooklyn consists of a diverse mix of workers' cottages, farmhouses and estate homes.  Features of the HCD include: three unique limestone houses featuring carved stonework by Matthew Bell (Albert Street and Water Street), a one-lane stone arch bridge (Gow's Bridge) and the birthplace of Lt.-Col. John McCrae (Water Street) and Royal City Park.

It's hard to believe the city limits ended at Forbes Avenue until the 1950s. When the Ontario Agricultural College was founded in 1874 it was located in Guelph Township, surrounded by forest, wetlands and productive farmland.  It was inevitable that the Gordon Street corridor that links the "town" with the "gown" would develop its own unique identity, with stately Victorian and Queen Anne architecture built by deans and faculty of growing colleges (Ontario Agricultural College, Ontario Veterinary College and Macdonald College) that would later merge to form the University of Guelph.   The streetscape descending towards the river from the hill creates a distinctive entrance to the downtown from the south.