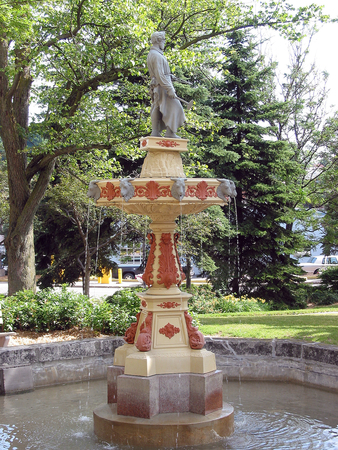 Blacksmith Fountain is located at Priory Square, on the north side of MacDonell Street, east of Wyndham Street, in downtown Guelph. The metal statue was constructed in 1884.  The statue was designated, by the City of Guelph, in 1988, for its historical and architectural value and interest, under Part IV of the Ontario Heritage Act under By-law (1988) – 12731.

The Blacksmith Fountain is a unique and handsome public monument. Its inauguration was on Queen Victoria's birthday, in 1885. A symbol of local industry, it was presented to the city, as the inscription on the red-granite base states, by J.B. Armstrong, a prominent local businessman, former alderman and owner of the Guelph Carriage Goods Company.

The Blacksmith Fountain has occupied three important sites in Guelph over its lifetime. The fountain stood in the centre of St. George's Square until 1922 when, to facilitate the passage of streetcars through the square, it was moved to Priory Square. Its position there overlooked the site where Guelph's founder, John Galt, is said to have felled the first tree.

The statue of a blacksmith is cast in a metal alloy. Supporting the statue is an octagonal basin, held by a Rococo-style cast iron pedestal. The water spouts from the mouths of eight rams heads that decorate the basin's rim. The base is constructed of red-granite and bears the historic inscription, “Presented by J.B. Armstrong 1884”.