The Norwich Street Bridge, built in 1882, crosses the Speed River to connect two sections of Norwich Street, in the Goldie Mill neighbourhood of Guelph. The single-span, pony-truss bridge was constructed as a composite of wrought iron and steel.  The property was designated, by the City of Guelph, in 1998, for its heritage value, under Part IV of the Ontario Heritage Act, By-law 1998-15786. 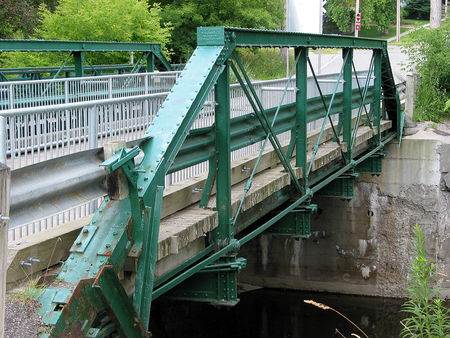 Built in 1882 by the Hamilton Bridge Company, the Norwich Street Bridge is associated with the transportation of industrial goods from the once-thriving foundries and mills that occupied the Goldie Mill area in the nineteenth century. The 1882 Norwich Street Bridge was built to replace an earlier bridge built in circa 1860. The choice of iron and steel over wood construction material, of the 1882 bridge, reflects not only technological advances in bridge building but the growing industrialization of the community at that time.

The Norwich Street Bridge's single-span, pony-truss, iron and steel design is the only surviving example from the several iron and steel bridges that once existed in the City of Guelph.