The Stone Road Bridge (also known as McQuillan’s Bridge) spans the Eramosa River on Stone Road East, between Victoria Road South and Watson Road South, in the City of Guelph. The single-span concrete bowstring arch truss bridge was constructed in 1916. 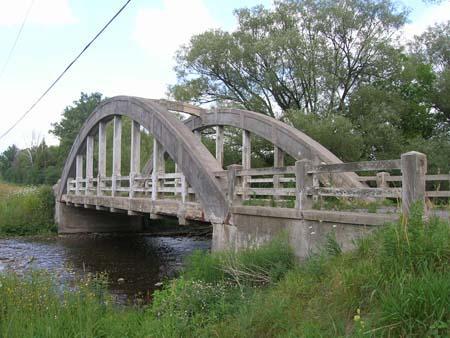 The property was designated, by the City of Guelph, in 2004, for its cultural heritage value or interest, under Part IV of the Ontario Heritage Act (By-law (2004)-17357A). The Stone Road Bridge has also been listed on the Ontario Heritage Bridge list, a list of provincially significant bridges maintained by the Ministry of Culture.  Stone Road Bridge spans the Eramosa River, a Canadian Heritage River and serves as an important gateway marker on Stone Road East.

The Stone Road Bridge is an important link to the city's pattern of growth and development. The bridge was built under the direction of Wellington County Engineer A. W. Connor, in 1916, in order to accommodate the increased settlement and agricultural production, in the area. It replaced an earlier wooden bridge, known as the McQuillan Bridge, due to the proximity of the site to land cleared and settled by the McQuillan family. The McQuillan family was one of the area's first settlers and their land later became part of the Ontario Agricultural College. Stone Road, on which the bridge is located, was named for F.W. Stone, another settler of the area. He was an importer of thoroughbreds and built a house that became the Ontario Agricultural College's first building.

The Stone Road Bridge is an early example of a reinforced concrete bowstring arch truss bridge. It is the only example of a concrete bowstring arch truss bridge within the City of Guelph. The bridge's bowstring design became popular in the 1920s and 1930s, as it required minimal material, was simple to install and could easily accommodate vehicular traffic.
Local contractor Charles Mattaini, who built over 50 bridges between 1905 and 1920, is credited with building the Stone Road Bridge. The spans measure 21.3 metres and the width accommodates one lane of traffic. The arches, composed of eight vertical members, are connected by a single cross beam.