The I.O.D.E. Fountain is located in a v-shaped parkette created by the intersection of Norfolk Street and Yarmouth Street, in the City of Guelph. The stone drinking fountain was constructed in 1914.  The fountain was designated, by the City of Guelph, in 1993, for its historical or architectural value or interest, under Part IV of the Ontario Heritage Act, By-law (1993) – 14439. 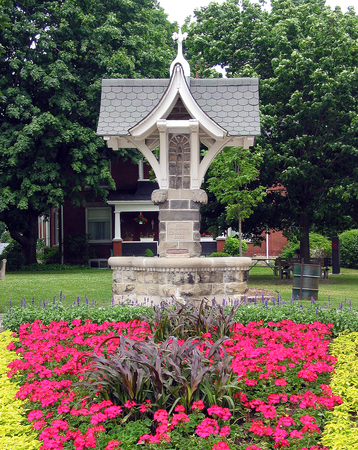 Located at the corner of Yarmouth, Norfolk and Paisley Streets the I.O.D.E. Fountain stands proudly as a local landmark, in memory of the late King Edward VII.

The I.O.D.E. Fountain is associated with the Imperial Order of the Daughters of the Empire (I.O.D.E). The Guelph I.O.D.E. Chapter was formed in 1909 with the initial goal of beautifying and improving Guelph. A result of this goal, the fountain, was the Chapter's first installation in the City of Guelph, dedicated to the memory of the late King Edward VII.

The contract to design the fountain was awarded by the I.O.D.E. to an English architect named A.B. Lund. With the assistance of the City's Parks and Shade Commission, it was erected in 1914, in Trafalgar Square, facing Wyndham Street. It was moved in 1927, to its present site, to make way for the Civic War Memorial. It is considered to be one of the City's most handsome public monuments.

The fountain has a large stone base that supports a small wooden roof structure. Carved stone and metal embellishments help to decorate the appearance. Four fountains spit water out of the stone base and several inscriptions around the fountain offer a reminder of its commemorative nature.