Gow’s Bridge spans the Speed River on the west side of Royal City Park. This stone bridge continues to serve both vehicular and pedestrian traffic.  Gow’s Bridge has been designated by the City of Guelph under By-Law (1990)-13471. 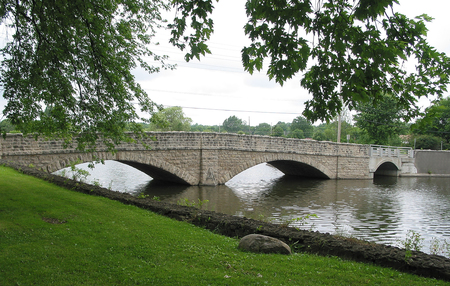 Gow’s Bridge has been designated by the City of Guelph as having historic and architectural value. This stone arch bridge remains as the only surviving example of several stone bridges which once crossed Guelph’s rivers. The bridge was built for the City Council in 1897 by Daniel Keleher, a local contractor. It replaced a wooden bridge constructed at this site in 1852 to circumvent the toll bridges on the Guelph and Dundas Roads.

Both the new and old bridges were known locally as Gow’s Bridge due to their location beside Gow’s Mill, a woolen mill and tannery owned by the prominent Guelph businessman and politician Peter Gow. Gow was elected Mayor of Guelph in 1866, was the first representative of South Wellington in the Provincial Legislative Assembly, serving from 1867 until 1876, and was then appointed Sheriff of Wellington County.

Today this unique remnant of Guelph’s stone heritage lends considerable charm and character to one of the city’s largest public parks.