Goldie Mill is located in Goldie Mill Park, at the northeast corner of Cardigan and Norwich Street, on the west bank of the Speed

River, in the City of Guelph. This three-storey limestone building, now a ruin, was constructed in 1866.  Goldie Mill was designated, by the City of Guelph, for its historic and architectural value, under Part IV of the Ontario Heritage Act (By-law (1983) - 11323). 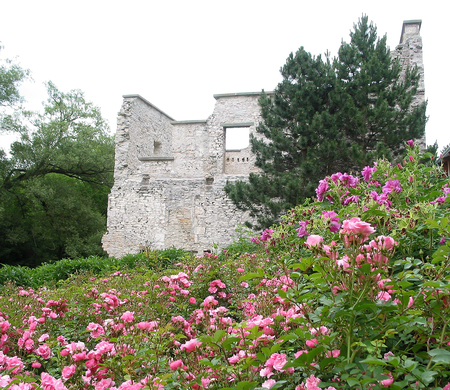 Goldie Mill is located on one of the most historic manufacturing sites in Guelph. In 1827, David Gilkison, a cousin of Guelph's founder John Galt, built the city's first sawmill on the site. In 1845, Doctors W. Clarke and H. Orton built the “Wellington Mills”, which was destroyed by a fire in 1850. Shortly after, the mill was rebuilt, in stone, and renamed “People's Mills”. After another fire, in 1864, the land was purchased by James Goldie, who enlarged and rebuilt the stone building, in 1866. As the owner of Goldie Mill, James was considered one of the leading flour manufacturers and dealers in Ontario, and served as President of the Ontario Millers' Association.

The mill expanded and flourished under the care of the Goldie family, until it was sold in 1918. In 1929 a spring flood carried the dam away, ending milling operations on the site. A fire in 1953, completely destroyed the building, and it is now maintained as a ruin, by the Grand River Conservation Authority. During its life the Goldie Mill site also included a foundry, cooperage, distillery, piggery and tannery. The diverse and long-time use of the Goldie Mill contributed significantly to the growth and prosperity of Guelph. The mill has been characterized as a model flour mill in Canada.

The Goldie Mill ruin has thick stone walls, with double-reinforced stone lintels, an unusual type of construction in Ontario. The stone used in the construction is quarry-faced limestone which was procured from the mill property. The most striking feature of the site is the ninety-foot brick chimney.